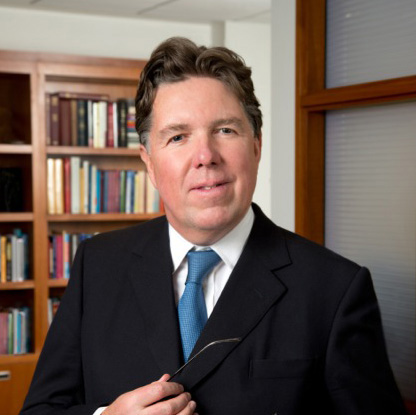 Sir Paul Tucker is a Research Fellow of the Mossavar-Rahmani Center for Business and Government at the Harvard Kennedy School.

He is the author of Unelected Power: The Quest for Legitimacy in Central Banking and the Regulatory State (2018). Described as “masterful” by Dani Rodrik and “profoundly important” by Larry Summers, it charts how the extraordinary power of unelected central bankers and regulators needs to be structured and checked in the interest of democratic legitimacy. His new book, GLOBAL DISCORD: VALUES AND POWER IN A FRACTURED WORLD ORDER, due out in FALL 2022, is about the geopolitics and legitimacy of the international economic and legal system. Both books are at the interface of political economy and political philosophy.

His other current activities include being a director at Swiss Re; a senior fellow at the Harvard’s Center for European Studies; President of the UK’s National Institute for Economic and Social Research; a Governor of the Ditchley Foundation; a director of the Financial Services Volunteer Corps, and a member of the Advisory Board for Yale’s Program on Financial Stability.

Tucker spent more than three decades in central banking, occupying senior positions in the international policymaking world, and was knighted by Britain in 2014.

From 2016 to 2021, he was the chair of the Systemic Risk Council, the independent body of former top central bankers, government officials and financial experts dedicated to a stable financial system.

As Deputy Governor at the Bank of England from 2009 to October 2013, he was at the centre of efforts to contain the financial crisis and to reshape the international regulatory framework for financial stability. Former Governor of the Bank of England Mervyn King said, “Paul probably understands more about central banking than anyone else. He knows about every aspect of that arcane art and now he [is] free to tell the rest of the world what happens behind those high walls.”

He was a member of the steering committee of the G20 Financial Stability Board, chairing its Committee on the Resolution of Cross-Border Banks in order to overcome the too big to fail problem. He was also a member of the board of directors of the Bank for International Settlements, the central bankers’ bank, and was chair of the Basel Committee for Payment and Settlement Systems.

At the Bank of England, he was a member of the Monetary Policy Committee, Financial Policy Committee (vice chair), Prudential Regulatory Authority Board (vice chair), and Court of Directors. During his thirty-plus years there, he led staff teams on monetary policy strategy, market operations, and financial stability, as well as working as a bank supervisor. He had secondments to an investment bank and to Hong Kong, where he helped reform their securities markets and regulation following the 1987 stock market crash.

Former US Treasury Secretary Lawrence H. Summers said, “There are many central bankers who know a lot about monetary policy and dynamic stochastic general equilibrium, there are few with Paul’s breadth of knowledge of philosophy, literature, culture, history and so much else.”