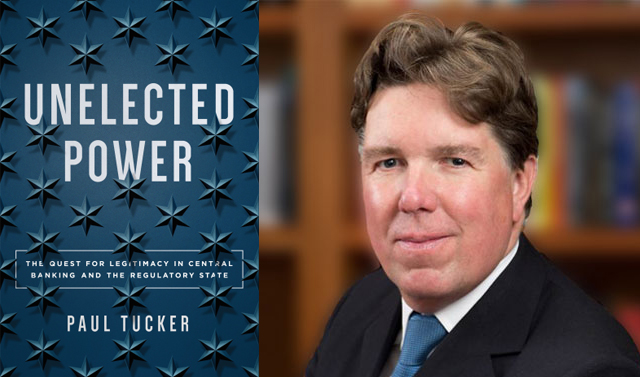 “Paul Tucker brings years of experience at the Bank of England and deep political-economic insights to the most contentious problem of governance today: the delegation of power to independent agencies of government. He shows that the Fed and other central banks have become powerful multipurpose institutions, escaping checks and balances, risking all independence. He then unpacks an entirely novel solution–his Principles for Delegation—which will set off a needed debate over reform for many years ahead.”—John B. Taylor, Stanford University

“This book is a much-needed study of a much-neglected problem. Combining experience with theoretical expertise, Paul Tucker offers us an insightful and original account of how central banks and other unelected authorities need to be oriented and constrained within a democracy. Unelected Power is a significant contribution to both political theory and social science.”—Philip Pettit, Princeton University and Australian National University

“How do we reconcile delegated authority with democratic legitimacy in an era when decisions are made increasingly by experts? In this magisterial and magnificent book, Paul Tucker, drawing on his extensive experience in central banking, provides us with clear principles for determining the trade-off between professional competence and popular support. A must-read for anyone interested in the theory and practice of governance.”—Mervyn King, former governor of the Bank of England

“An important book on a fundamental problem—by an author who combines theoretical intelligence and practical experience in a compelling fashion.”—Bruce Ackerman, Yale University

“Paul Tucker has written a most timely and thoughtful analysis of the role of independent agencies in democratic societies. He makes clear that in practice these agencies differ widely in their practical and justifiable insulation from political pressures. Not surprisingly, he concludes by defending a high degree of independence for central banks but also emphasizing the need for caution in extending their mandate beyond the bounds of monetary policy.”—Paul A. Volcker, former chair of the Federal Reserve

“Unelected Power is a well-researched, extremely knowledgeable, and authoritative account by a leading expert. It is destined to be one of the most important books on this increasingly topical and contentious subject.”—Charles Goodhart, London School of Economics

[As] Paul Tucker . . . discusses in [his] masterful recent book . . . the argument for democratic delegation is a subtle one.”— Dani Rodrik, Project Syndicate

“A book about central banking that begins with Britain’s vote to leave the European Union, America’s election of Donald Trump as president and Continental Europe’s rising populism is starting in the right place. That alone gives Paul Tucker’s Unelected Power: The Quest for Legitimacy in Central Banking and the Regulatory State a claim as one of the more perceptive books on his subject in recent years.”—Joseph C. Sternberg, Wall Street Journal